A downloadable Framework for Windows, macOS, and Linux

Update: Removed the browser version. Unity 5 seems to have broken it and I can't fix it right now. Standalone versions are still downloadable.

Please try not to mind the bloody fucking horrible animation.

You probably already know how the rules are gonna be.

The gameplay is kinda-sorta familiar, kinda-not. You use the Attack button plus a direction (or no direction at all) to attack while the Defense button allows for blocking (neutral), running (forward), dodging (down, down-back, down-forward), jumping (up, up-back, up-forward) and backdashing (back).

Attacking while guarding throws a grab which, if landed, puts you in a clinch from which the opponent has a short escape window to break the throw by pressing Attack + Defense; you can attack a grabbed opponent using the Attack button at the cost of reinstating that window each time you try a hit, or finally throw them with Attack + Defense pressed at the same time.

Stamina governs everything you do. Attacks take Stamina, having your attacks blocked takes more and blocking attacks takes even more. Hitstun and pushback increase as Stamina decreases. The less life you have, the less Stamina. If a blocked attack brings you to zero Stamina, you suffer a Guard Break. In effect, it's more or less a guard gauge. It recharges with time.

There are also Power Blows, which cause an instant Guard Break whose length is tied to remaining Stamina.

I did what I could to hunt out the glitches and I almost certainly failed miserably. So that's a thing.

Should be straightforward. You have a zip that you are to extract somewhere and an executable to click in it. For that matter, you might not even have to extract the zip. 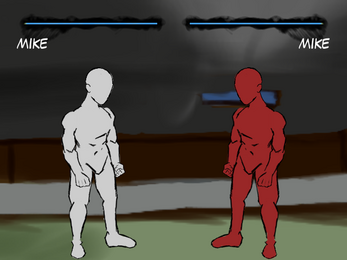